Energy in motion is a trailer that tours the country with the objective of promoting YPF as a comprehensive energy company. It contains 6 attractions people would learn about the types of energies available in Argentina, where they come from and how these impact the lives of the population today and in the future of increasing demand.

All the contents are based on the concepts of science, technology, sustainability and the future. The immersive virtual experiences use the latest tools and devices. 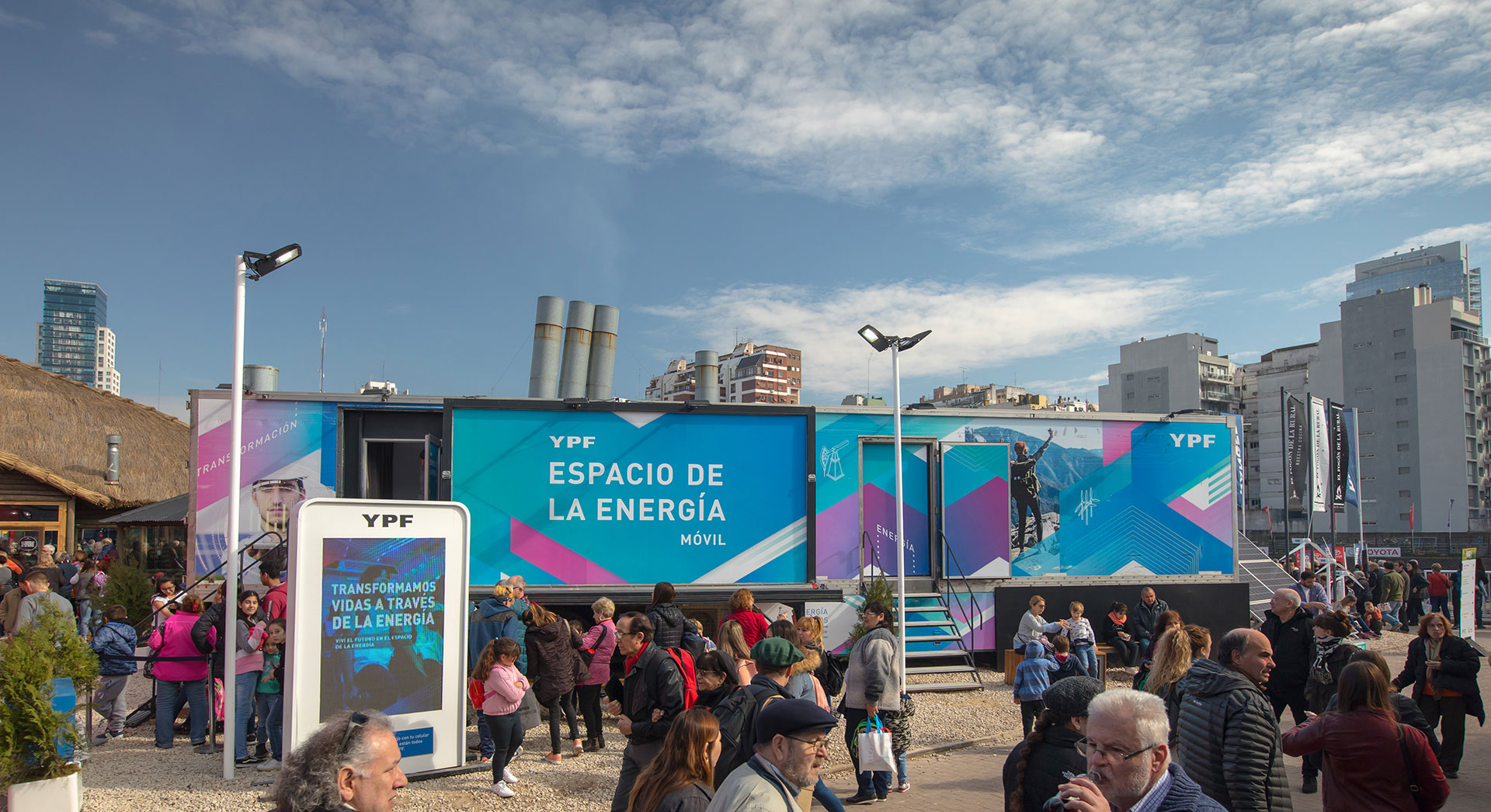 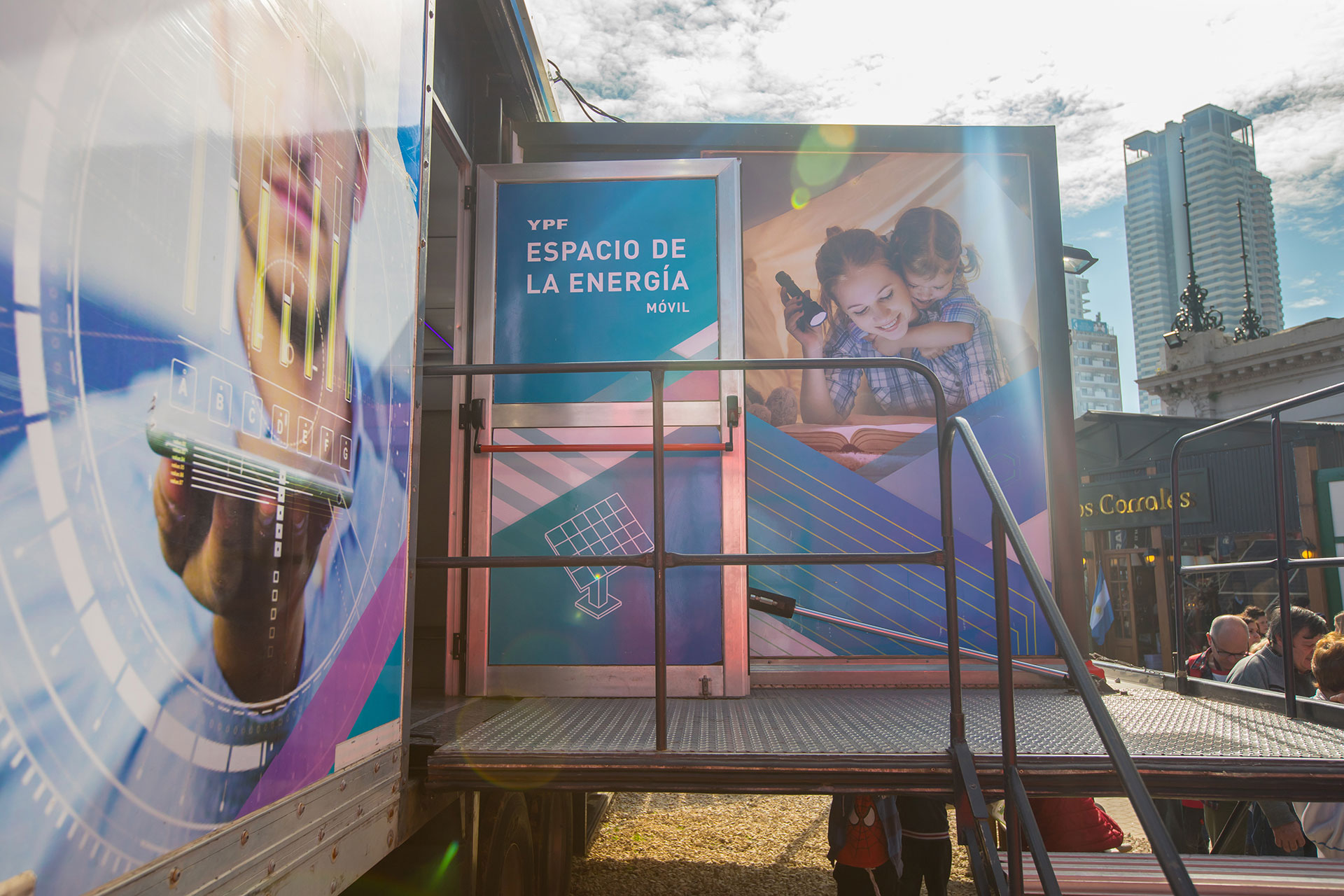 This section is an interactive panel that combines both physical elements of the scenery with 3D animation. The digital slidable panel “provides energy” to the graphics. Through audiovisual content it shows how YPF is part of our day to day lives and sets in motion a whole city.

· Design, idea, and development of the attraction
· Design, development, production and implementation of the rail system and screen mounting
· Programming of the Extended Reality system, interaction between panel movement and on screen animation and 3D animation 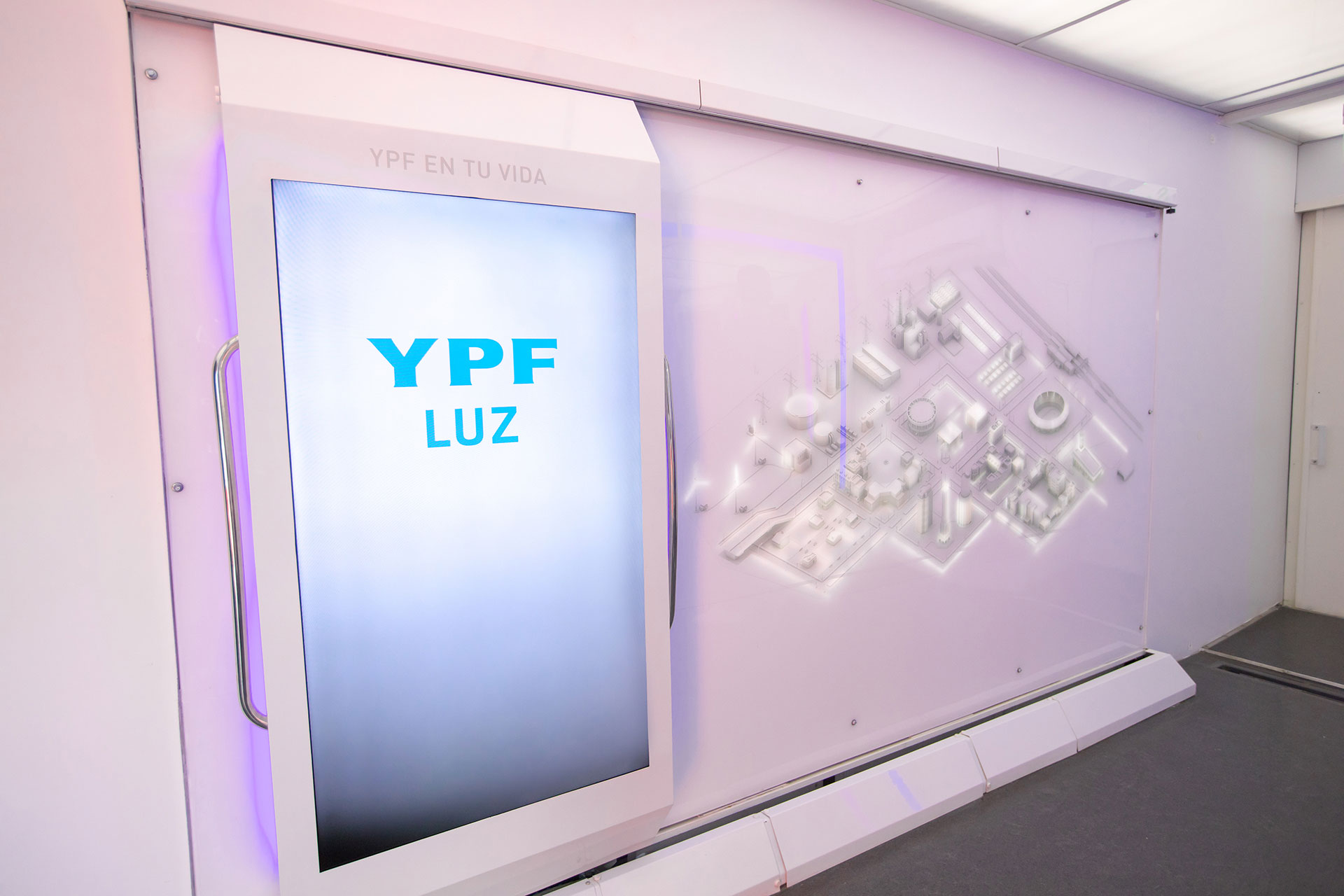 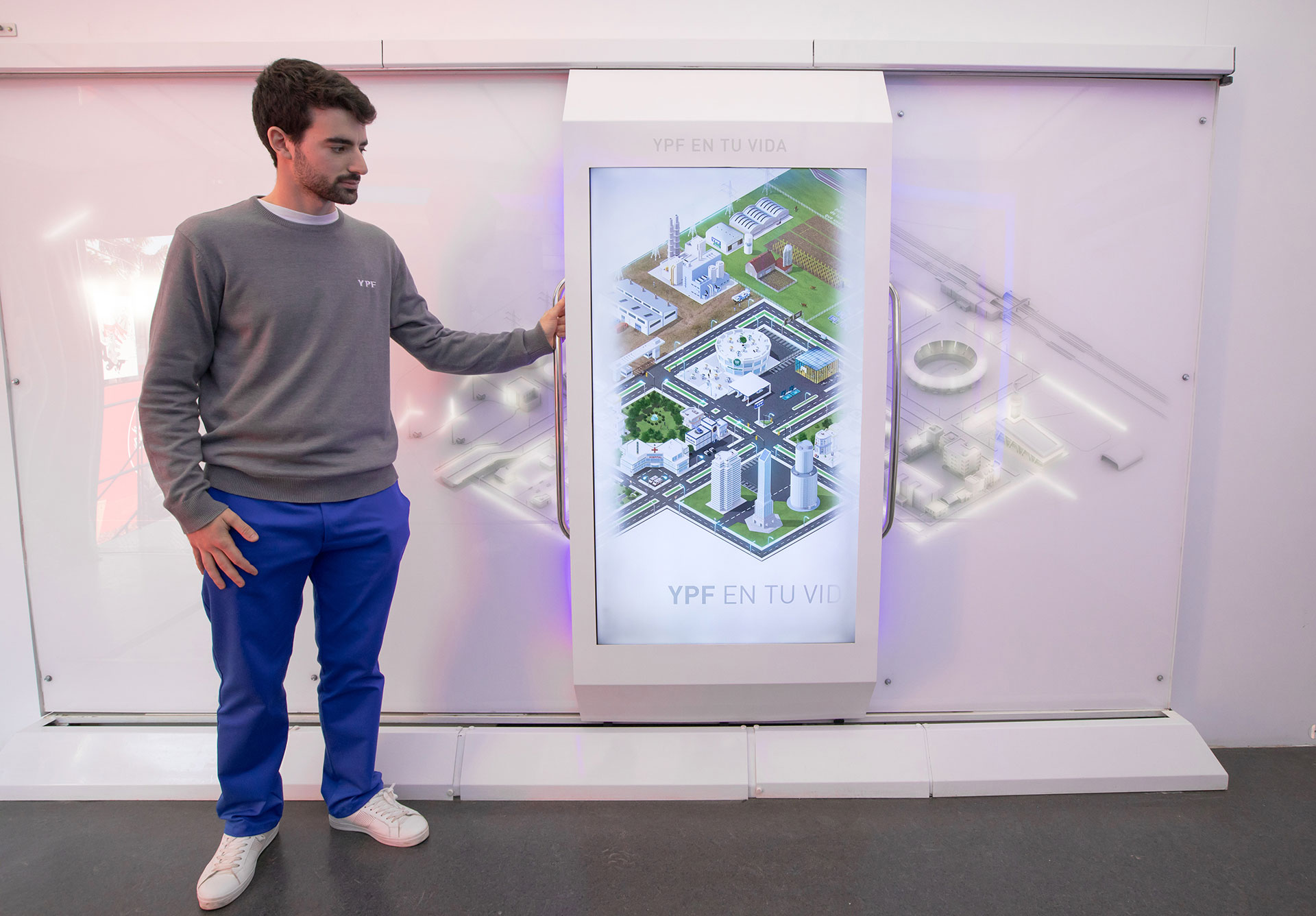 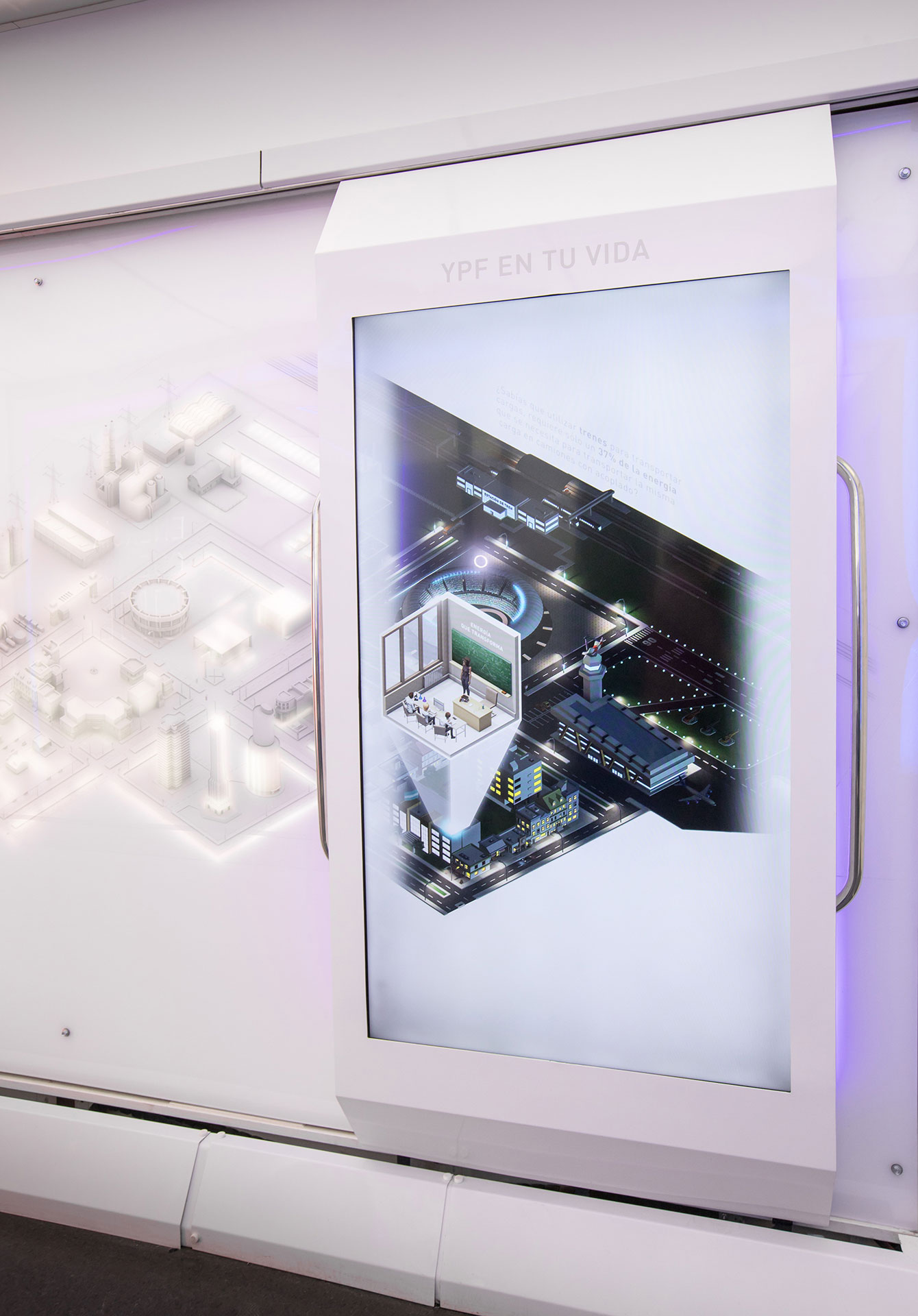 The first film tours the installations of Y-TEC, the biggest center of applied investigation in Argentina with 47 Laboratories, 12 pilot plants and the most unique equipment in Latin America developed by the union of YPF and CONICET. During the adventure 5 of these laboratories will be visited through a virtual tour.

The second film shows –through content generated entirely in 3D– the characteristics of different types of energy: hydrocarbons of conventional and unconventional extraction and renewable energies such as wind and solar. 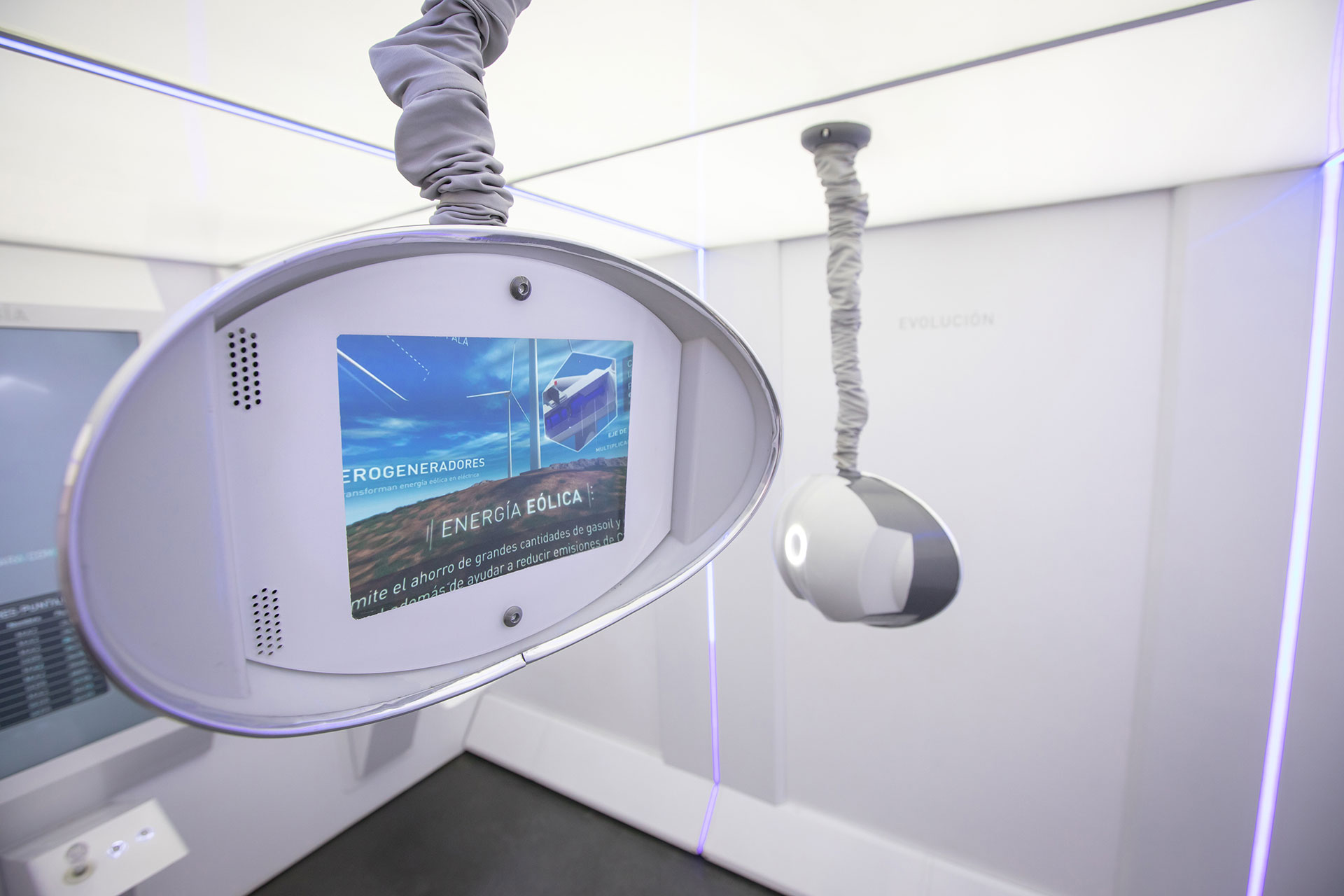 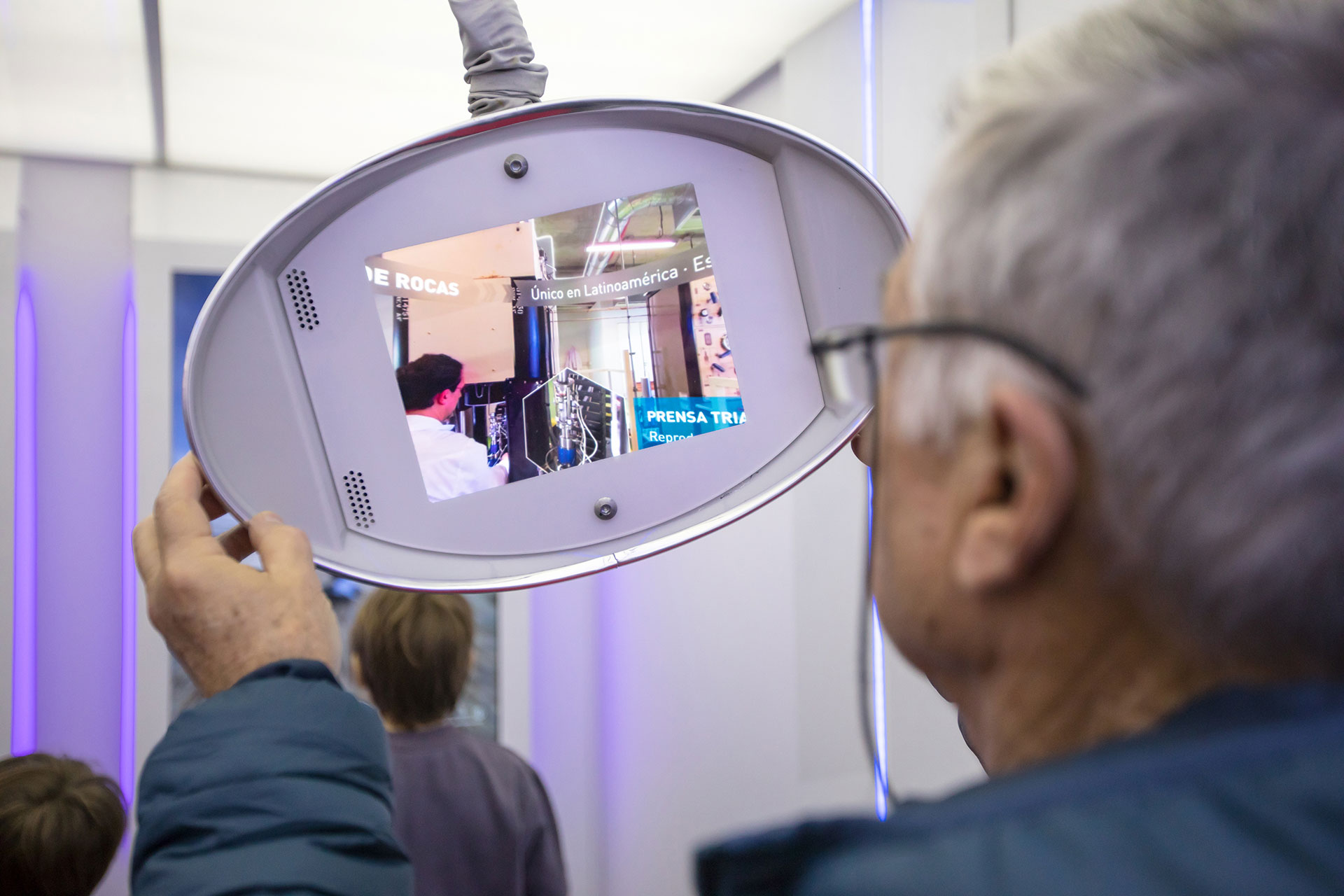 With the representation of a giant cell phone screen this attraction, oriented towards the younger audience that visit the trailer, seeks to promote the university careers that are related with energy.

Through a “vocational test”, the participant gets to know a career related to their interests and liking to later take a selfie characterized as a person of such specialty. The photo is later sent through whatsapp or e-mail. 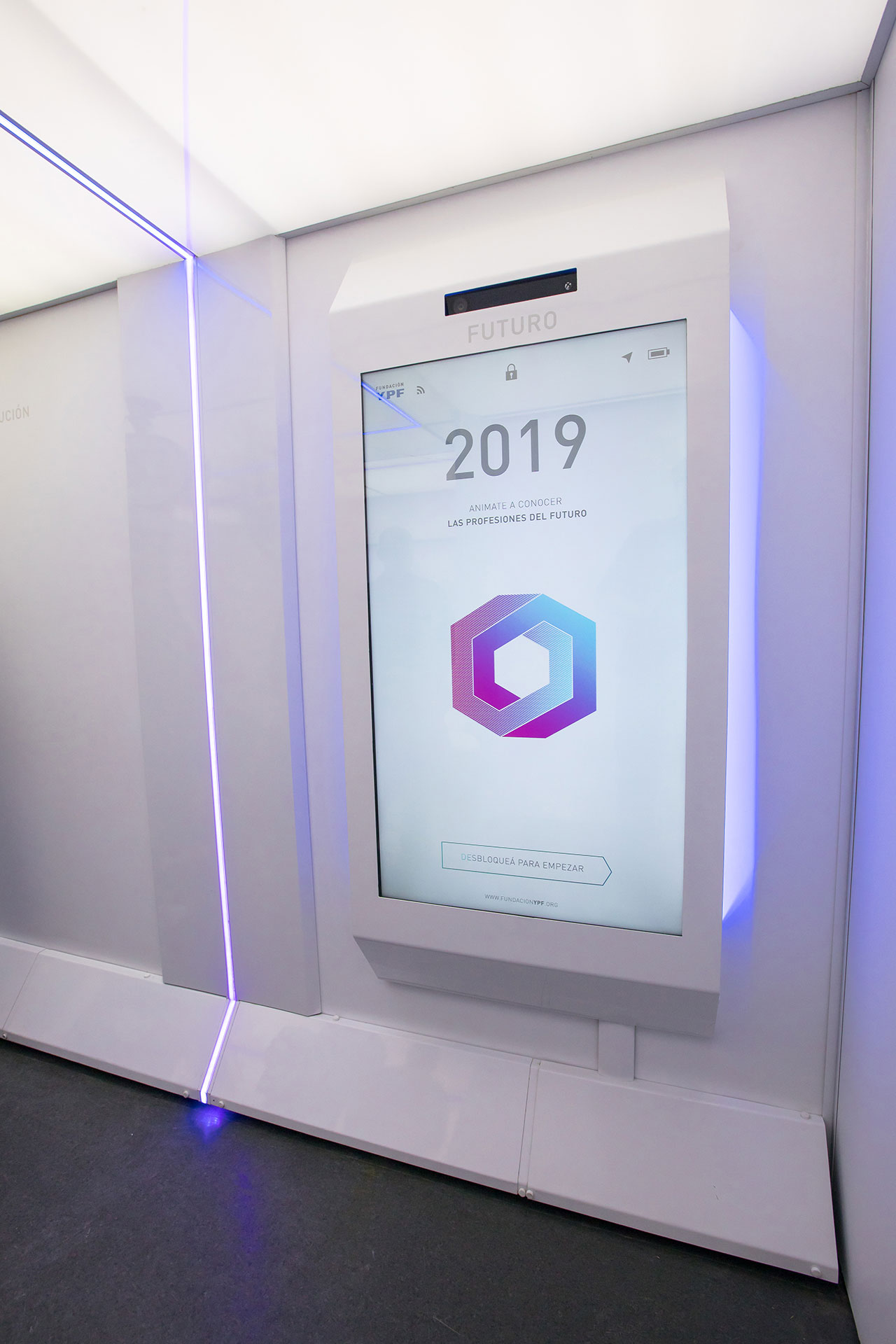 This “runner” game is controlled with a joystick, and tours three
scenarios that represent three different types of energy (fossil, wind, and solar), with a vehicle utilizing the developed energy from each source.

While following its trajectory and dodging obstacles the player must collect energy capsules that will provide the vehicle with speed. New adds on will be gained through out the game as the player advances level, such as solar panels and wind turbines. 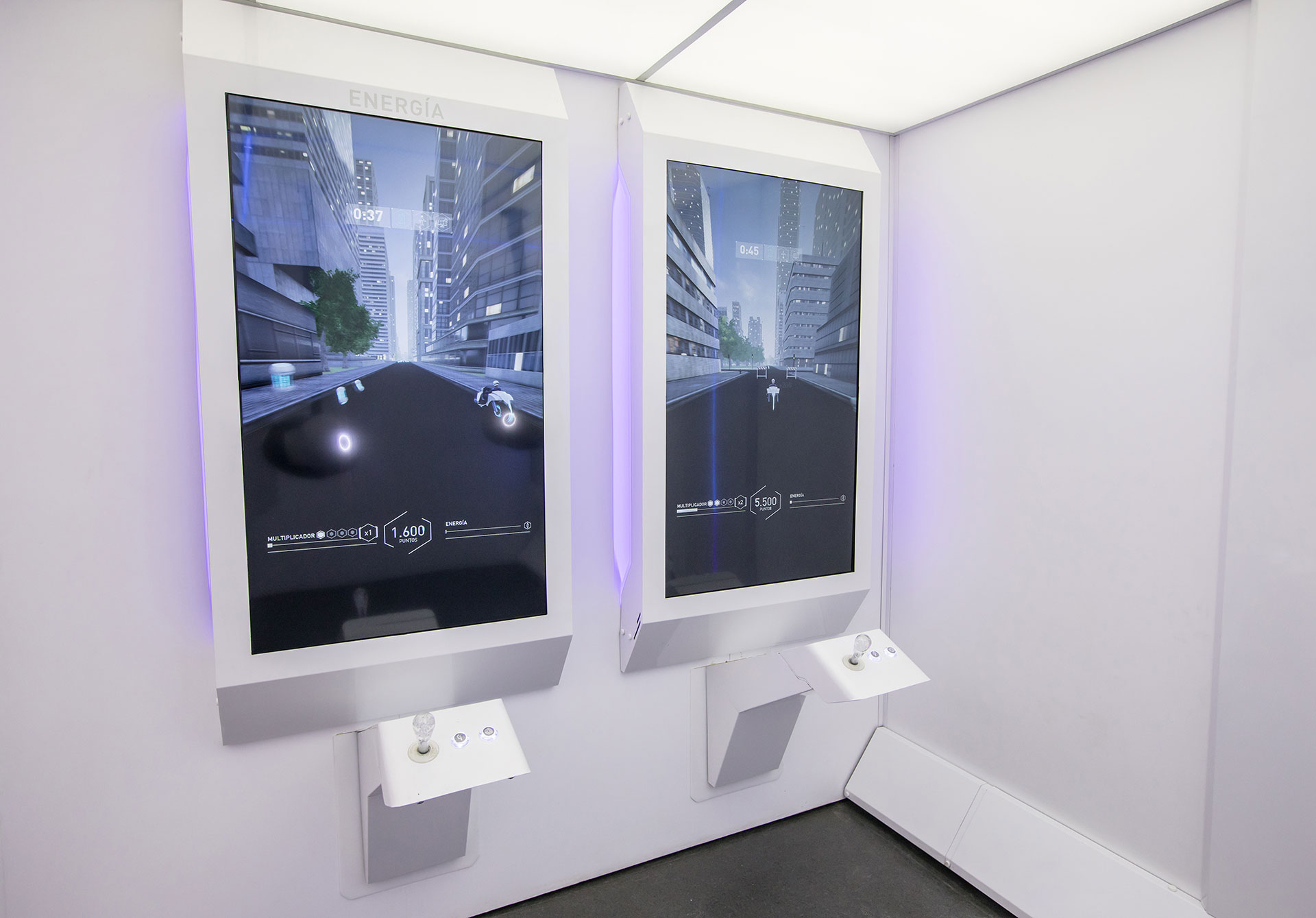 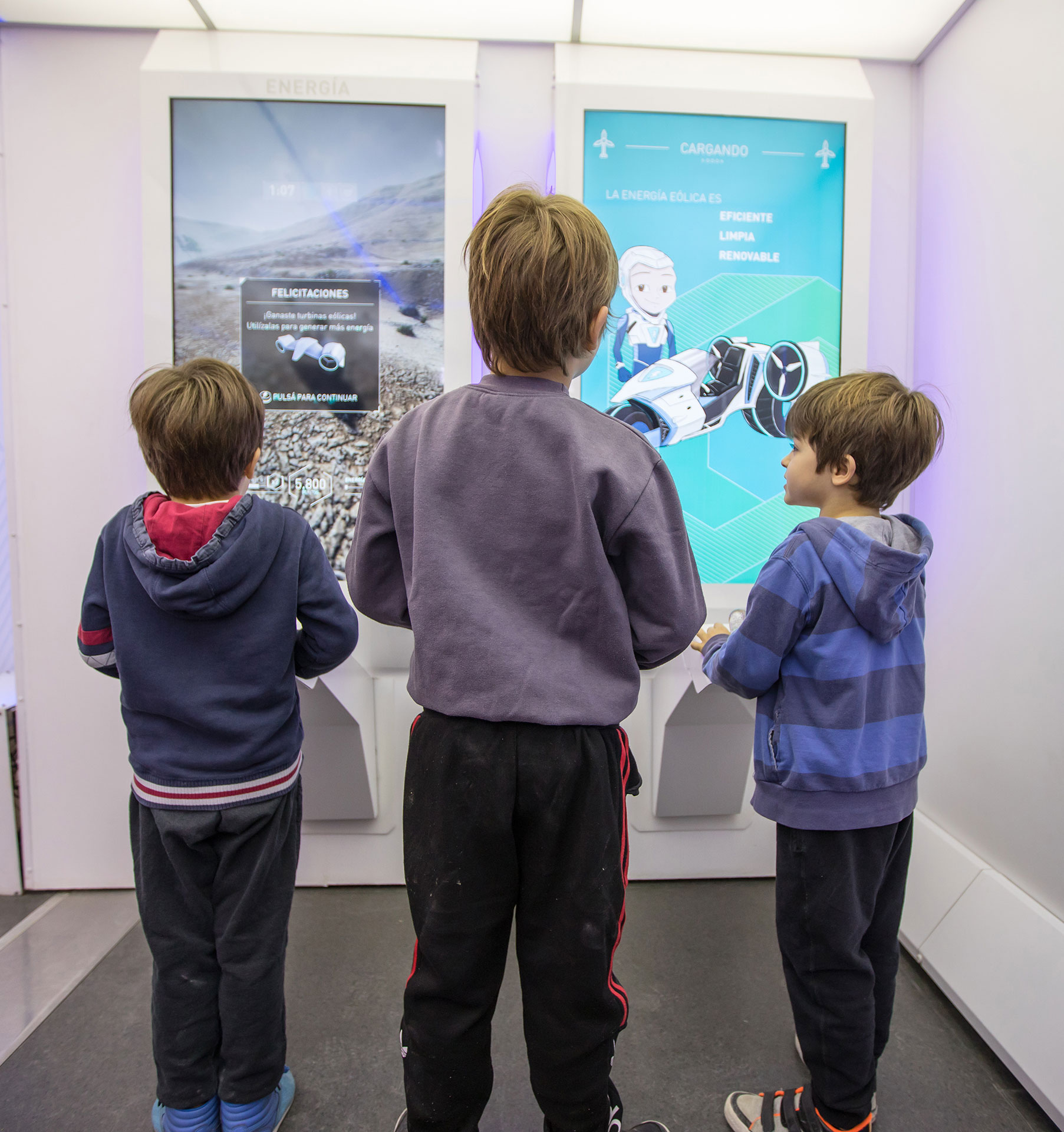 Inside awaits an immersive experience where the whole space dives into the story projected, making the visitor a part of the tale. This is accomplished through the movements of the chairs platform, aswell as the scents, wind, and light effects. 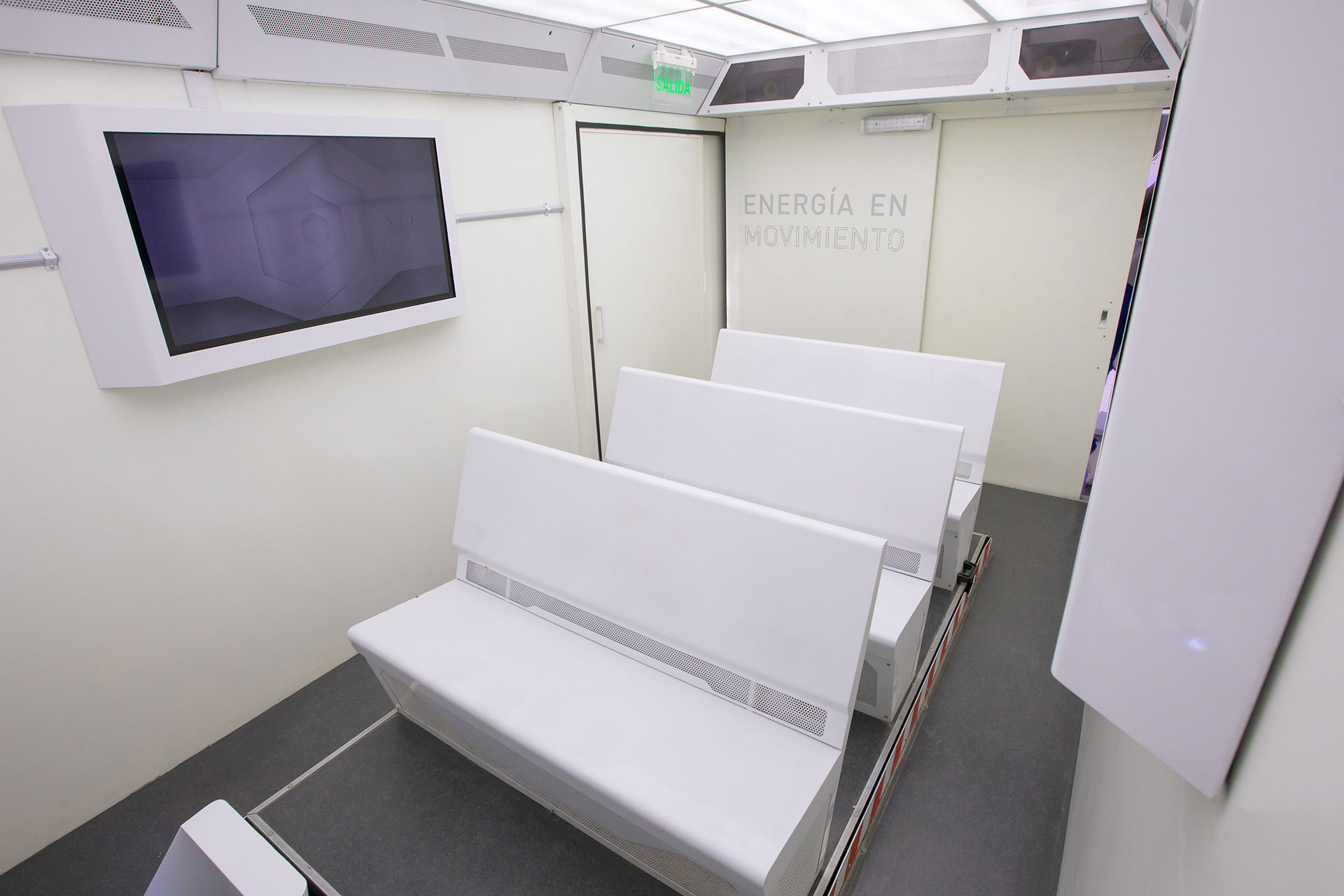 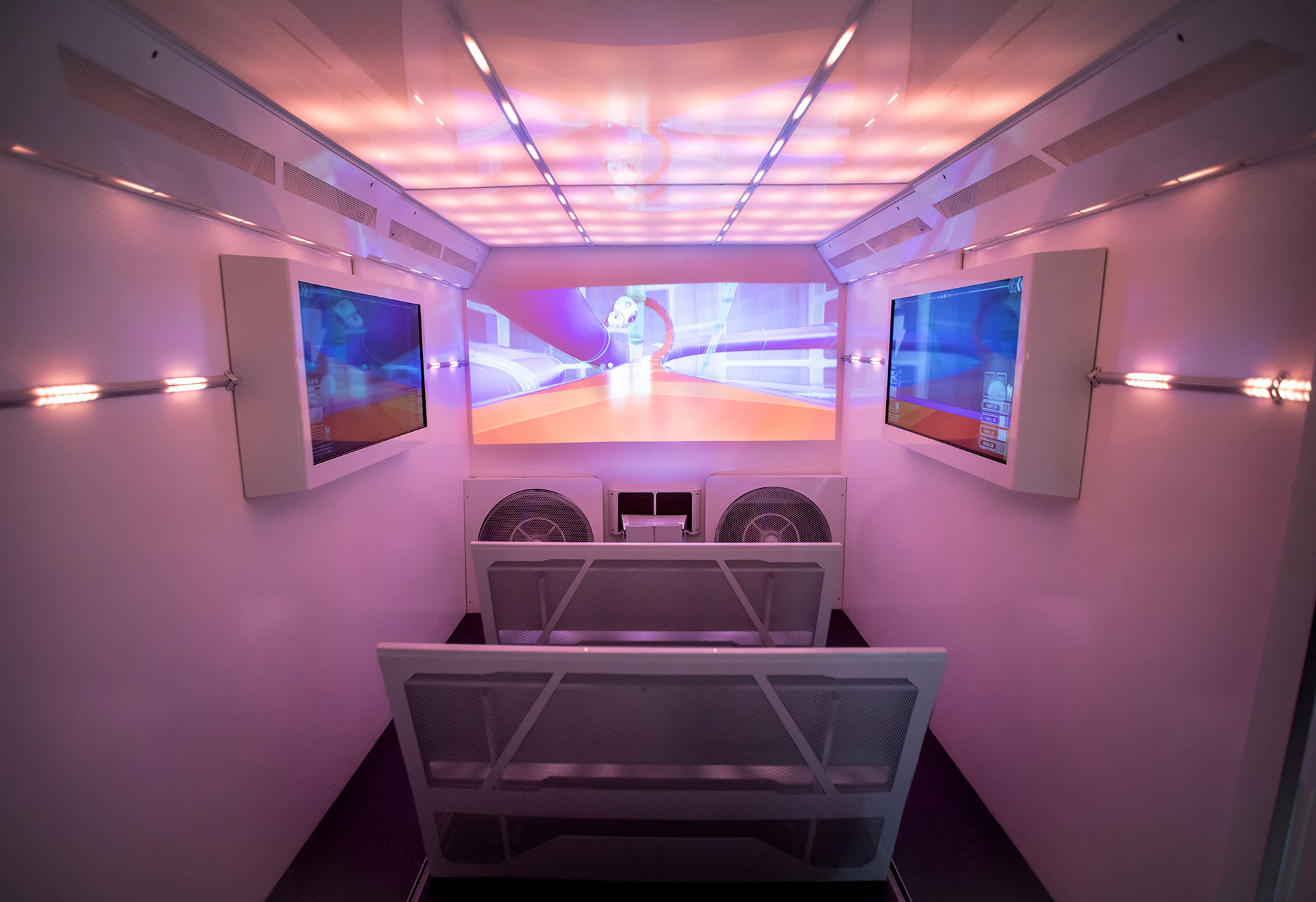 Next project →
Back to projects ←